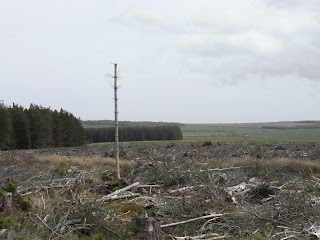 This is from the official Forestry Commission website's introduction to Sneaton :

The previous weekend, Chris Wright of CLOK had mentioned the event . He said it was a good area and had been renamd Parsley Wood - which sounds a bit cosier than Sneaton Forest - conjuring up an image of Hugh Fearnley Whittingstall plucking bits of weed for his kitchen and pretending he knows how to cook it.

I didn't see Chris Wright on the day - but maybe he got confused by the name change.
Changes of name are usually associated with an attempt to erase a past negative history : Windscale to Sellafield; British Leyland to Austin Rover; Labour to New Labour; Conservative to David Cameroon's Conservatives; Gideon to George Osborn; Katie Price to Jordan . Some of them work ok - like Gideon to George. Others just continue to carry the same bad whiff associated with the old one. Which was it for CLOK - in an area (apparently notorious by the standards of Forestry Commission 'managed' sites ).

So It's Sneaton and Parsley.

Maybe CLOK have hit upon a good idea with this - so we can start renaming some of our areas to make them look new or as an ad man would say ( with a nose for cash but little else) to freshen them up a bit .


It looked bad on the way in . Th FC had cropped some areas with the usual post nuclear devastation (see photo) - and the only non pine I saw, were a couple of wind sown downy birches.

The CLOK personnel were cheerful in their blue tent with Alastair Mackenzie amazingly there at 11 am (1 1/2 hours before the starts closed) - which surely meant that the brown course was going to prove to be difficult. A few asked where I'd been - worryingly that was before I had set off.Lots of comment about how pleased the planner was with the area . The planner was unable to answer my immediate question - about whether he'd seen any parsley in Parsley's Wood when he was out 'planning'- or whether the Parsley was the herb surname of some way gone Yorkshire farmer . I said I'd keep my eyes open for the parsley and bring some back if I found any .

It was a leisurely start - grinding along drainage ditches in a dense claustrophobic spruce forest. As usual there was the occasional brutish patch of newly sown spruce just to mix things up. Things did get better as on the south side of a beck there was a good slice of open woodland which was good running. Presumably the FC couldn't squeeze in their regular geometric stands in this uneven broken area. Some bits looked as if they could get over run with brackenas the season wore on - but at least currently it was well down.
One of the classic controls was 'distinctive tree' - with that stylised outline of a Christmas tree as the IOF symbol. Not a frequent control on courses. But the conifer can also represent a distinctive deciduous tree - IOF not having sub categorised the disticntive tree symbol into coniferous, deciduous ( one of those candy floss on a stick would work ) and maybe something for larches - with maybe leaves dropping off a conifer. IOF seem to churn out any number of symbols for walls and fences that I'm sure this sub category of tree could work. Probably going a bit too far to sub categorise it even more .

The FC had achieved a super result with the distinctive tree. In a clearing in a block of spruce stood the blackened statue of an oak. It became apparent on closer inspetion that the FC had not yet worked out the difference between conseravtion and preservation. The original pioneer forresters as they laid out their grid iron had clearly deided that the tree was special . So to achieve the double objective of preserving it and making sure that no one but CLOK planners would ever find it - they had run their columns of spruce around it leaving the oak a bit of breathing space. So far so good . But 60 years later the spruce had outgrown the oak - at a fast rate. So high in fact that any light to the oak had been curtained out. No sunshine - no photosynthesis - and the tree left out to hang. Super management.

The rest of the run was mixture of some nice open strips , twisting through bits of pine and a nice gladey run through some sitka with the ditch mounds clothed in bilberry ( another name change now to blueberry just to satisfy our American friends who can just about cope with colours - but probably a retrograde name change)..

It was a decent area to run but with some hazards and one area of really rough pine forest. Overall times were a little slow and for our contingent it was again Barnaby and Bob who most impressed from our team.

On the name change , NATO seem to be adopting a reworking of the their brand name to N&TO - which looks a little like B&B - the bankrupt bank - or just b&b for a night's bed. Not sure the & works - ever. Not even the CLOK people bothered with it in the reworked name for Sneaton.
Posted by Barry at 17:55