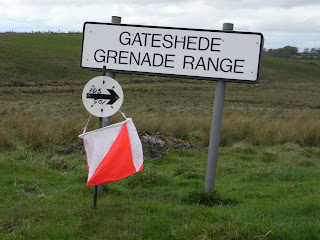 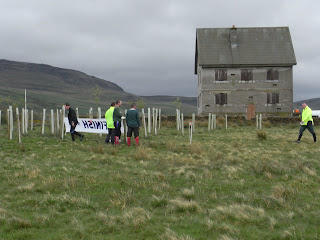 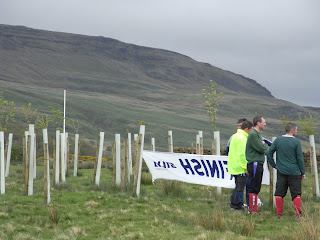 Watches were synchronised for 1400 GMT sharp for the start of the Military TA Champs in the Harris Relay. Unlike the usual O relay , the Harris requires a high degree of organisation planning and initiative - which is why the Navy were not able to find a team.

Our own Maj. B Spence explained the rules clearly and coherently and displayed a set of medals for those who were able to complete the course without needing a fag (can't imagine many were claimed ) . The military people asked a lot of very serious questions like who was providing the air cover and whether bayonets should be fixed. The NN team were more concerned about finding a cap for Bob and staying warm behind the toilet block ( the smarter squaddies knew it was warmer to stay inside the toilet block}.

Not sure what happened next but Boris handed Pte Fraser a brown envelope with 3 maps inside ( Rob having decided our 3 man team should do the 4 man course). As we were soft civvies we did the planning in my car.

Rob - looking to catch the attention of the recruiting seargeant -assumed Capt Manwaring's role and decided who should collect which controls. This was 'planned' on the basis of :
a. The ones which were in the nice runnable areas would be done by Rob
b. I would pick up all those controls which were in a foot of standing water or near a minefield
c. Bob would do the rest.
Control 45 was memorable - because Rob had worked out it was on the wrong side of the hill (?!) - so the gem was his. He then set off - ordering that we meet at control 70 about 50 m from the finish.

The weather was rough - so rough that you couldn't light a fag. Having finally got a felt tip pen to write (and deleting no 45 from my list) I was last out and headed out across the grenade throw zone and then across a few water hazards then into a nice patch of Lodgepole Pine. Water was leaking through me in minutes and the pen ink began to run on the map. Every few minutes there was rapid gun fire - but the sheep didn't seem that bothered.I bet Forest Gump never did a Harris event.

I was back in double quick time actually PDQ- so quick I had time to get my camera from the car. Minutes passed and Bob appeared .......quite a lot more minutes until Rob limped in clutching his hip. It wasn't clear if this was an old shrapnel wound, flat feet or if he'd misread the map and ended up as a target in the firing range - and if he had why he had been missed ( with his bright yellow jacket on )....

It looked as if we could be on for a prize - although Rob's gloomy expression suggested we were doomed. Then the reconciliation as we rattled through the numbers - and that was the fix. Rob blamed me - I blamed him - Bob said he wasn't to blame. Rob accused me of being too laid back , chaotic and badly organised. I said I was only obeying orders and anyway I was much wetter than anyone else. Bob said 'mmmm'. There was no no.45. and that was that.

Maj B Spence - who knows a few things - said our commanding officer R McK should take the can. Had it been a mission in theatre then we'd have failed . We'd have been captured by the enemy - unless they'd been Italian or French. Capt McK would have been reduced in the ranks or better still court martialled.Fortunately as civvies we only lost 15 mins rather than the withdrawal of the fag allowance and double corned beef rations.

Any ideas what the military purpose of the Harris is - other than to get people wet ? Do they have a different course for pacifists ? Maybe we'll try the pacifist one next year
Posted by Barry at 22:27