LEWISBURN AND RUSHY KNOWE 10MAY 09 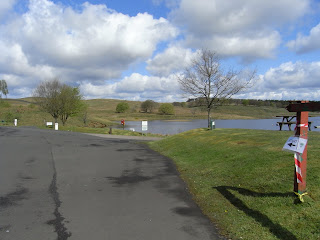 There was the added bonus of a hummocky , lumpy grassy area with dozy looking cows pondering oblivion . Then the finish at Leaplish on Dave's map etched in as a tiny footnote to Colin's masterpiece.

The event was planned by that most gentle of gentlemen Alastair Wilson- Craw of http://www.recyk-ya-bike.com/ fame. He managed to come up with some physical brutes of controls but didn't seem too bothered about it.

Bob and I got there in fair time (usual 90 minute drive there) - only to find a 3 km stroll into the start - along the brand new bike track . Really fine job . It really is worth getting the mountain bikes up there. Quite a few of the gates had been left open ( and it couldn't have been us orienteers as we always jump over fences rather than take gates). This was down to the bike anti gate warrior that we came across heading north west who thought it was her job to object to the presence of gates on HER bike track. Probably more important things for her to worry about - with the Daily Mail going up in price next week which should really upset her even more. Bob was left to engage with her - as he's the diplomat.

At the start the NATO staff issued helpful warnings about NOT to cross the stream between 12-13 but to proceed down river to the bridge that was cunningly unmarked on Colin's map. Very tricky . It's always the bits off the map that are truly worth exploring. Unusual for NATO to give any warnings - other than to me for the time of course closure.

I took the brown course - and first run after having missed most of the winter with injuries , trips away and a month long bug. Thankfully Bob took blue and the first control was the same - so up and running ( but only on the tracks - forest as dense as ever). It was slow going in places with the real adventure trying to work out which ditches were mapped.You are left to wonder how the forestry people managed to plant only 1 species of pine and 1 of spruce - when there must be at least 50 of each with some really dramatic names.

The course exploited the sharp ridge to the north east to the full with planners having fun dragging runs up and across. The real hammer was a 40 metre ascent to the ridge with mud and loose ground giving way underfoot and my first and only swear word of the day. It was a real struggle but then - best bit of the course - a run through 250 metres of an open grassy larch glade ( isn't that the name of a toilet cleaner). Pity the rest of Kielder wasn't the same. I felt like running round it a few times to stretch the legs - normally I would but more down to a failure to consult the map.

Then the stream crossing . As my legs are longer than most then the good 'advice' could be ignored as it had to be quicker than the bridge . We all learnt a lot about river crossings/hydrography on Rob's course at Cong Burn in Feb this year . Rob reckons rivers should be crossed on one of his courses at least 5 times and usually only after there has been sustained snow upstream for 4 days . He usually reserves you the option of a motorway bridge 2 miles downstream or a handout on how to make a raft.He doesn't accept any refusal to cross a stream in flow.

Plenty of sticks around to dip the crossing - and looking a bit like a water diviner who has found water. Rule 1 of rivers is to cross up stream of rapids unless you are Harrison Ford ( good pun) which means you are very stupid and cross the rapids themselves. I come to rule 2 in a minute. So with about 25 m to cross - so far so good but quite wet already. Rule 2 says the water on an outer bank of a river bend is always deeper than the inner . Now the problem as the water sloshed around the upper thighs. Up on the bank and surely a few seconds gained . Surely worth it.

The other highlights were crossing paths with Debbie while running through a dense patch of forest - which meant I was surely near a control - and also got a warm cheer. Then the bad news - stab from some rusty barbed wire resulting in an early morning tetanus jab from a hefty nurse who also took my blood pressure 'as it could be that we can give you some dietary advice to reduce your weight if your blood pressure is high' . Yes sure. What advice are you taking on this?

( Incidentally, Debbie had no sympathy when she explained Julian's absence as due to a splinter at an event the previous month that had caused a blood infection - so maybe I was unusually cautious on this. At least I didn't have to update Julian on the Baltic Dry Index ).

Best day's performance by NN, was young Barnaby Warren who blazed his way to beat the biggest field of all on the day on the light greens and was rewarded with an ice cream.

My reward was standing in the reservoir trying to wash the mud off most of the lower half of my body . But then on a fine warm day who needs to rush these things.