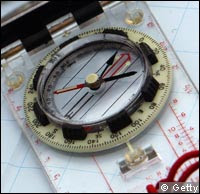 This is an article from Saturday 30 May's FT - in their 'pursuits' section. (The FT doesn't do sports or hobbies - and pursuits suggests something far more serious and worthy like maybe fox hunting or cribbage )

.http://www.ft.com/cms/s/2/c2932ace-48c9-11de-8870-00144feabdc0.html
The FT's hard pressed readers (cover price £2) are also getting whacked by the recession . To ease the pain arising from Crash Gordon's tax hike and the collapse in their property portfolios - they've taken a look at few pursuits that have the beauty of being cheap.
O has done rather well on the cheapness scale - in the competition with running' table tennis or wiff waff,kite flying and something called capoeira ( Well they had to come up with something wacky just to show it's a serious paper ). The printed edition included an Action Man style compass - but they seem to have got a proper Silva one for the web page.
In fact for cheapness O tied with kite flying for first place on the cheap scale . I guess the only similarity between th 2 is that we also use kite on our events - but the ones used in kite flying are easier to find . Maybe we should combine O with kite flying to make it cheaper still by marrying their skills and their kites to a controller's.
FT even report of events costing £1 to enter. That should get Sir Fred to open his wallet . Although I can't ever recall a £1 event apart from the Chopwell CATI.
I'm a bit mystified about why running (three £ signs for cheapness) is worse than O ( one £ sign for cheapness) when both need running shoes ( the running bit grinds on about sports bras as being an additional cost for runners - but presumably only female ones) and running doesn't need a compass ,clothes that don't get ripped in brambles and a big petrol tank in the car to get you to the Lakes and back.
They refer to O as being 'cunning running' - so cunning obviously that it works out a lot cheaper than 'running' when it needs more and better equipment. Such financial wizard skills could be used at Crash's Treasury - or maybe they were and that's why we're in a mess now.
Caroline Povey at BOF is quoted merrily telling the FT that it is a mental challenge. So after the bright readers brush aside the FT crossword , ease by the Sudoko and the pages of company stats - the next challenge (for the Sunday morning) would be running round forest trying not to get lost and counting all those pennies saved.
Posted by Barry at 21:54