Now in it's 5 th year - the biggest event in the cycling calendar in July is not the Tour de France , but the NATO Bike O. This time Richard Field and his team were back at Capheaton - and just to complicate things even more for the competitors , Richard had timed it to coincide with a racing cycle event on the lanes in and round Ryal.
This was the best turn out for this event with about 30 competitors from across the local O clubs. Some had an unfair advantage - such as Alastair Wilson-Craw - who probably had hundreds of bikes to pick from at his http://www.recyke-y-bike.org/ organisation down at Byker. Alastair settled for a sprint cycle - and was able to get away with it ! Others turned up on the usual mixed bag of racers , hybrids and MTBs.
It's always great to have an orienteering event in the middle of another competition and our bike/orienteers were going so fast it was hard to tell us apart from the pros - although we were probably all a bit scruffier than the lycra legends and our bikes were just a bit cheaper.
For sure Alberto Contador would've struggled on this O course - without a big red car to follow. It would mix things up a bit on the TdF to slot in an O event for one of the days -and definitely catch anyone out who was on drugs!
Starting late is often an advantage at an O event as you can seek out elephant tracks when navigation fails - and the bike event is no exception as it gave the early riders the chance to knock back the nettles surrounding a couple of the controls for the late runners.
Next year's is slated for Mitford with Adrian Barnes as the controller scheduled to take the blame for any bad navigation !
Results are on the NATO web.
Here's some photos: 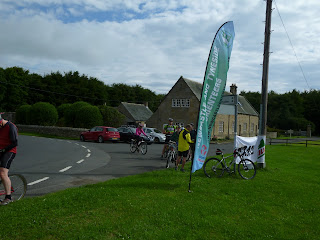 The NATO banner marking the start and finish.It would've been handy if they could have placed it on the top of that telgraph pole for the final run in! 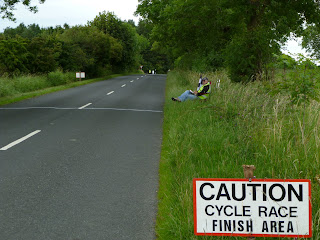 This was the finish area for the 'real' cycle race - with the marshall asleep. Not too much activity here. It would've been good to have slotted in a control somewhere on this length of road..... 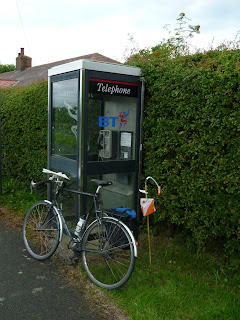 One of Richard's controls - and it's not that often that you get an O control at a phone box - in fact there aren't too many phone boxes left so this could be a final chance. Richard had helpfully left an emergency number with the map - and I was sorely tempted.... (In fact I was probably disqualified at this point - as the rules are that you should remain in physical contact with your bike at all times). 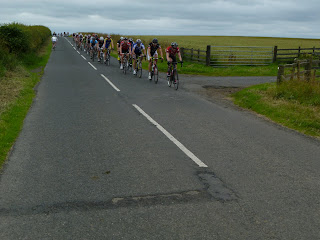 Here comes the peloton up Ryal bank - I guess they are looking for the control at the graveyard?? I just hope the organisers have enough pin punches - otherwise there could be a rumpus. 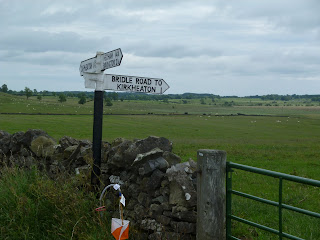 Which way from here ? Nice to have some place names on an O event - would make things a bit easier on some of the moorland courses. 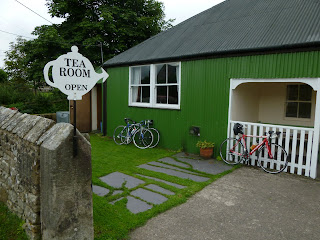 Whew ! At the finish - and a great cuppa tea and an apple slice at Capheaton Cafe. Over for another year ! 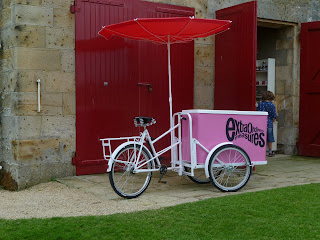