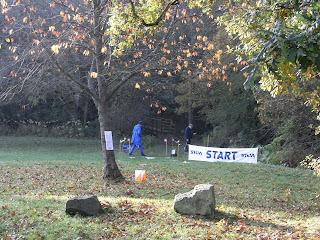 No - this was not an 'easy' control. Instead it was the rig set up by Boris to demonstrate his much loved EMIT system 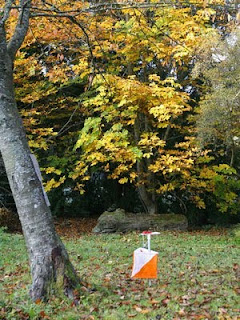 All the great Autumn colours - including the red and white . 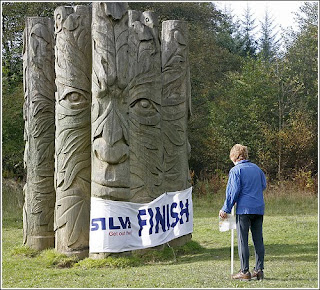 What a fine monument to finish with - and no problems here in setting up our banner!!
Weather - 14 deg C no wind - bright and sunny
A truly glorious golden Autumn day - with Hamsterley forest at its very best.
With the pleasant winding road to the start through the bright glades and swards it was like a movie set from New England in October. The type of movie where the actors' faces glow as much as the foliage - but 'behind closed doors' things aren't quite so rosy or a rabbit's boiling in a pot.
The night champs which preceded the day event had gone off well - with an unusually high number - 22 entrants. Well done to Boris and Rob for running the show.
Boris was back in the white command module for the day event - directing the organisation with military precision. Unusually for an NN event , the start was within quick march distance from registration. A shortage of our youngsters on the day meant that the start didn't have it's usual magic. Fortunately, the compact set up meant we didn't need as many junior couriers to ferry orders back and forth as we usually did.
It was a fine turn out with all the local clubs well represented. In fact it was the biggest turn out of the year at an NN event. For sure the weather helped.
Hamsterley in and round the river has very mixed deciduous woodland - it is not until you stray away from the main road that you hit the skin piercing pines. Rob's courses took the runners through some fine holly bushes (literally) and along that fine beech avenue. The courses were blessed with a lack of brambles - quite a nice change from some of the cloth wrenching forest runs in the north east.
While on the subject of brambles ( a subject close to the backside and legs of most orienteers) , I caught a quick snatch of a broadcast one evening on the R4 nature programme. A botanist from Kew Gardens was discusing hybridisation of plants ( mainly whitebeam trees ) - in respect of which (rather like gloom) , the Welsh seem to have a lot of. He then went on to brambles - mentioning that there are so many sub species of the genus , Rubus, through hybridisation - that it would take anyone a life time to study them. Of course that's probably true if you work at Kew Gardens - where I dare say there's not a bramble within caber tossing distance of the perimeter of the gardens. Not much scope for researching the Rebus there.
Brambles are probably a subject worth developing a little further - perhaps from a botanist. I'll look into that ! It may make an interesting diversion while trying to track down that triacky control.
Rob has many theories about brambles ( though like many of Rob's theories - they usually have no basis in fact and are based on suspicion). One of these is that brambles are not attracted to undisturbed deciduous forest. Maybe he's basing this on his treks around Hamsterley ( for sure not Chopwell) - I feel certain it was not on the syllabus of his electrical engineering course ( but who knows).
The day was to be enjoyed. Bob was the best runner from a diminished NN squad on the blue - and Barnaby took top honours among the youngsters on the light green. Jonny Malley (EBOR) was so terrified of the brown - he opted instead for the Durham Fell runners fell race ( about 10K or so) up towards Doctors' Gate. Unfortunately for Jonny - runners can follow you a lot more easily on a fell race and you can't take any short cuts ! Mind you the first 15 minutes of constant climbing was a lung buster on a warm day. At least with orienteering you can take a breather...........
DFR are well worth checking out - they run some good events out of Hamsterley ( as well as other areas) and do things in a very NN way - very relaxed and unfussed.